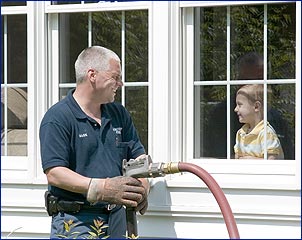 The Progression of Heating Oil

Heating Oil has been the safest and most reliable solution for heating homes in Maine since the late 1930’s. From the beginning, the use of heating oil has been matched with ongoing progress to increase the quality of heating oil by means of a more refined product and through increased equipment efficiencies. In fact, new advancements over the last 30 years have reduced heating oil’s carbon footprint by over 40%.

Impressive progress, but more progress is on the horizon. During the Summer of 2010 the State of Maine passed a bill (supported by Gray's Heating Oil and Maine Energy Marketers Association) that requires heating oil’s sulfur content to be further reduced from its current level of sulfur content of 2500 parts per million to 15 parts per million by the year 2014. In addition, the same bill requires all heating oil to include a minimum 2% biofuel by the year 2014, with the percentage of biofuel in heating oil increasing as the supply of biofuel increases. Such a high quality of heating oil would further reduce particulate emissions to one ounce per 1000 gallons. In fact, the sulfur content in 15 ppm heating oil is not only less than in natural gas, but less than just the content of sulfur in the odorant added to natural gas. At 15 ppm heating oil is the cleanest, most efficient fuel source available.

What does this all mean to you, our valued customer?

It means with the combination of better refined heating oil and the improved heating technology you can feel good about your decision to use heating oil to heat your home and hot water.

You don't have to worry about running out of oil because Gray's Heating Oil will automatically deliver fuel to your home or business. Our staff with the help of our modern computer system will monitor your individual heating requirements so that you get the heating oil you need, when you need it at the daily cash price.

Should you prefer to monitor your own supply of heating oil, remember to allow sufficient lead time for delivery during regular business hours. Severe weather and hazardous road conditions must be considered in your lead time. Our minimum delivery is 100 gallons. If you prefer our will call option, we recommend calling 48 to 72 hours in advance of delivery.

Click here to learn more about our Pre-Pay Programs and Budget Cap Program.

Upon approval by our credit department, you are eligible to charge fuel deliveries and services to be paid in full within 28 days from the date of service or delivery. For fuel deliveries, our driver will leave the invoice on location unless instructed otherwise; the charge will be applied to your account. For service, an invoice will be mailed.

Budget accounts are available for all credit approved customers. All regular budgets are based on 12 payments beginning in July and ending in June. Payments are due by the 15th of each month and are based on your previous heating season's usage and an estimated cost per gallon. All budget accounts must begin with a zero balance and a full oil tank. Customers who fall behind on payments will be subject to a late charge of 1.5% per month on any past due balance. You may be required to pay for subsequent deliveries according to our 28 day terms, or at time of delivery.

All budgets are based on estimates; therefore, it may be necessary for us to make adjustments to your payment amounts during the season due to fluctuating prices or changes in your heating needs. In these cases you will be notified in advance.

Budget payments are for heating fuel only; service related charges must be paid at time of service.

If you are not a budget plan customer and would like to become one, please contact our office on or before June 1st.